In January this year, an internal memo went out announcing that a new model of leadership had been in the works at Dev Academy — one that formally acknowledged a leader within the organisation and aligned with our values of treaty partnership. The leadership team now had two general managers: Dougal Stott, representing Te Ao Māori and Emma Barnes, representing Te Ao Pākehā.

The role of General Manager at Dev Academy is only two years old, born from the work that a few people had been sharing across different roles. When Emma Barnes joined the team in 2020, two weeks before lockdown, it was still very new.

Both Emma and Dougal had noticed the crossover in mahi they were doing, with questions around how they could coexist and in Dougal’s words, “how to do it in a way that was mana enhancing for both of us, but also the rest of the organisation as well.”

By October, during a routine visit to the Pōneke campus, Dougal joined Emma at Fidel’s for breakfast and the topic came up (through some stroke of fate, on the anniversary of the signing of He Whakaputanga).

“I think I just sat him down and was like, ‘So… what if we shared this job’,” Emma laughs.

“We always had the idea that we’d share the role and have our separate areas, playing to our strengths and working together as a team.”

During his time with Dev Academy, Dougal has been a kaiāwhina, supporting Te Ururangi scholarship recipients, delivering the Human Skills curriculum, interviewing applicants, taking on an advisory role as Kaiārahi Māori, and worked on embedding kaupapa Māori within the culture of the organisation.

What began with work in scholarships to address the participation rates and access issues for Māori, (in partnership with Te Puni Kōkiri) developed into looking at our policies and procedures, marketing, the teaching and learning process, and beginning to engage with Māori communities and the Māori tech sector.

Dougal led the charge on events and initiatives to support Māori students, like the Māori in Techseries. “That was all about inspiration and motivation, about putting Māori technologists in front of aspiring technologists.” 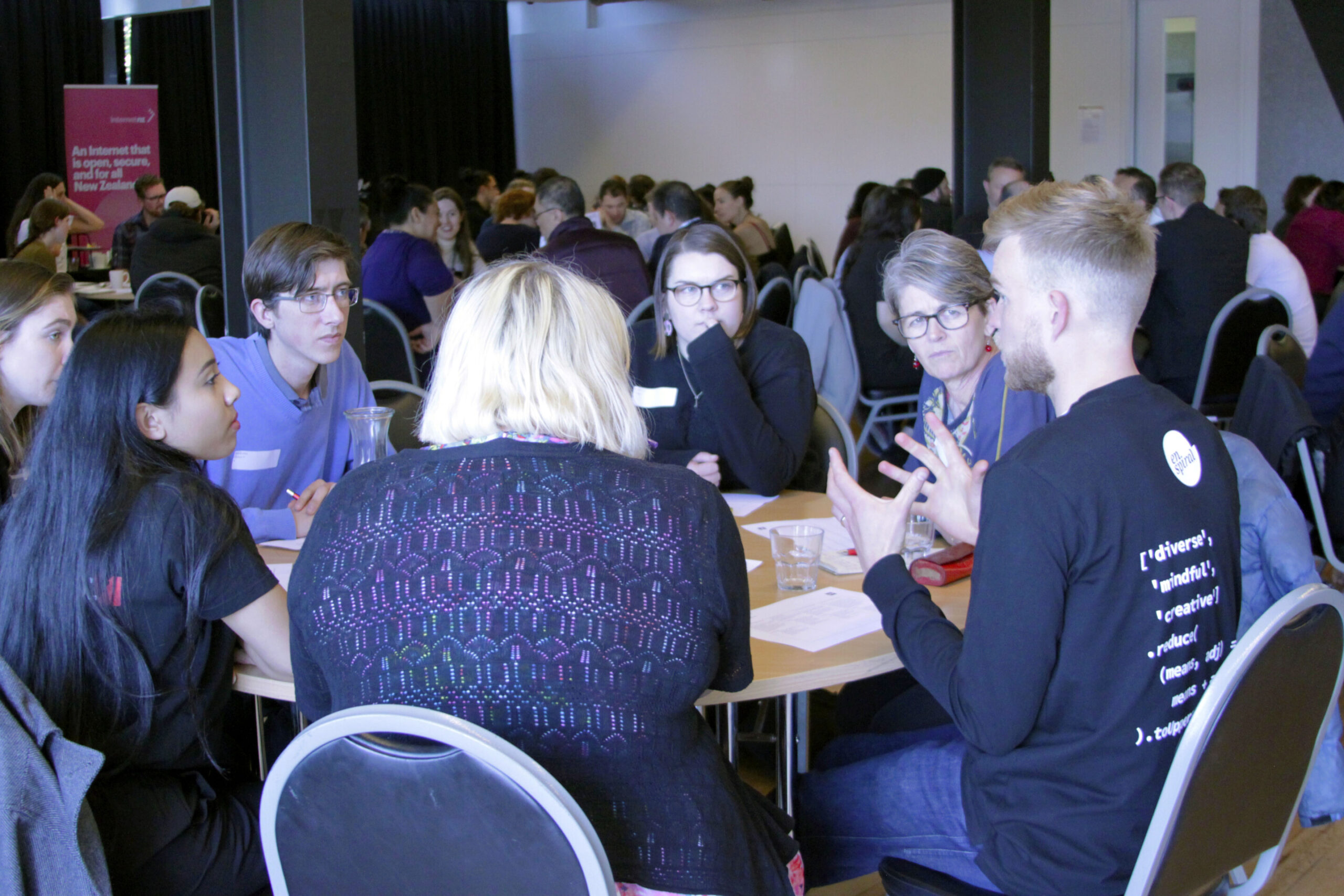 Attendees at the Te Tiriti Meets Tech event in Pōneke

A lot of the focus has also been internal — building staff confidence with the usage of waiata, embracing te reo and tikanga Māori within their own practice. In 2019 the team had their first marae noho in Tāmaki Makaurau, with workshops building cultural competency and getting comfortable in that space.

It was around when Emma joined in early 2020 that the Kaitiaki Rōpū formed, which Dougal says was “essential” to his work. “I was becoming that go-to guy for anything Māori and I needed more support to make decisions, and needed to have certain people within that rōpū to help me with that. Champions within each business unit of the organisation.”

“And without doing those things, there’s no way we would be where we are today. No, no, no — it’s a long game, there’s years of background work to do first before you can even consider going down this path. Otherwise it does become very tokenistic.”

What does this look like in 2021, on a cultural level? Teams start and end meetings with karakia, weekly waiata practice is the norm, new folks are welcomed with mihi whakatau and emphasis is always placed on whanaungatanga and working kanohi ki te kanohi (face to face) with external stakeholders where possible.

Emma reflects fondly that having a mihi whakatau when they started was the first time experiencing that in a work organisation.

“I find it really generative and lovely… To me, Tikanga feels like safety and acknowledgement that we are all humans.”

What does the future hold?

Dougal: “For me, this leadership model embodies our shared commitment to the original intent of Te Tiriti o Waitangi. It means that a Māori lens is applied to all aspects of the business. It means a Māori worldview is at the highest level of organisational decision making, it’s valued, respected and appreciated. It means we are responsive to the needs of Māori learners and communities, and we are intentionally looking to Te Ao Māori to influence our decision making, how we engage and how we design and plan for the future.”

We’ll make mistakes and succeed together. Emma and I can both stand in our own mana and share space moving forward.”

Emma: “I think that leadership is sometimes a bit lonely and hard to figure out what to do and having another set of eyes and ears and thoughts and all of that is to me, super comforting. It’s that support and togetherness.”

This is a long journey, and Emma notes “I know that the work is never going to be done. We’re 180 years behind but all I can do is push myself. If pākehā aren’t pushing ourselves, if it doesn’t feel scary, it’s not the right work.”